How Safe Is Your Drinking Water? New Report Raises Concerns

The document, released by New York Public Interest Research Group in May and titled “Emerging Contaminants in New York’s Drinking Water Systems,” highlights a handful of potential issues with water in the Hudson Valley area.

The report highlights contaminants such as PFOA and 1,4-dioxane as emerging problems in local water supplies.

The summary of findings includes these facts:

Legislation has took action recently in 2017, passing a law that required the health department to conduct water testing every three years. But concerns still remain, particularly about emerging contaminants such as PFOA.

Also called “C8,” PFOA has been detected in the blood of more than 98% of the general US population, though it is in the low sub-parts-per-billion range. The company that invented PFOA and PFOS, Minnesota-based industrial conglomerate 3M, stopped producing the substance in 2002. Since, there has shown to have been a steady decline of PFOA in the bloodstream of humans.

1, 4-dioxane is an organic compound that is found in cosmetics, detergents, shampoos and pharmaceuticals. It is a byproduct in some ingredients such as polyethylene and PEG. According to the CDC, short-term exposure can cause eye and nose irritation, however, long term effects suggest that 1, 4-dioxane is a carcinogen. 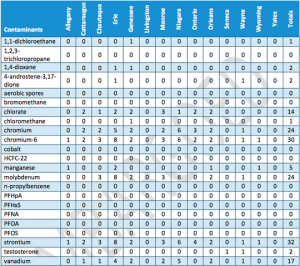 Culligan of Hudson Valley Can Help

Call us today to get a FREE water test and find out of your tap water contains contaminants.

We offer two testing options at Culligan. Our basic water testing is free. When the testing is complete and the results have been determined, we will contact you with our customized recommendations for eliminating any contamination that may be in your home’s water supply.

Immediately test the water in your home if you experience any of the following: